Conference season is upon us and our i2e Professional Learning Specialists have been out in force attending, presenting, and bringing back valuable insights to share with the rest of our team. We didn’t want to keep this great information all to ourselves, so we are excited to be sharing it with all of you in a multi-part blog series. This week we are highlighting the Microsoft Education Exchange (E2) in Paris, France.

“For the past five years, Microsoft has held an annual event to celebrate educators and allow them to collaborate with each other, called the Microsoft Education Exchange (E2). This year, the event was held in Paris, France. More than 300 educators from over 100 countries gathered as changemakers to share, learn, and grow with each other.

My #Road2E2 began earlier this year while on a MIE Expert call, during which they announced an opportunity to win one of 10 tickets to represent Team USA at E2. The opportunity was open to MIE Experts who met certain criteria, such as leading a presentation and developing innovative lessons. I hit submit and waited. The morning of the announcement, I was on a professional day, but during the break, I was able to listen on Facebook Live, and I heard my name announced.

On the first day of E2 we entered the conference and met the members of our collaborative teams. More than 50 teams were put together to complete the learning activity. Each team was comprised of about five or so members from various countries, and in many instances, team members didn’t even speak the same language. We introduced ourselves and then eagerly awaited the keynote. Christina Thoreson, Sonja Delafosse, and Melody Isnard welcomed us in and gave us an exciting breakdown of the events that would unfold over the next three days, including the Global Educator Challenge, the Learning Marketplace, and the breakout sessions. Lindsay Bayne and Marjolein Hoekstra followed, along with the Flipgrid team, to talk about how we could share our journey with each other and the world, including social media challenges and a Flipgrid hunt. To end the morning, Mark York, Samantha O’Leary, and Simon Johnson explained how we were going to complete the Global Educator Challenge over the next two days. 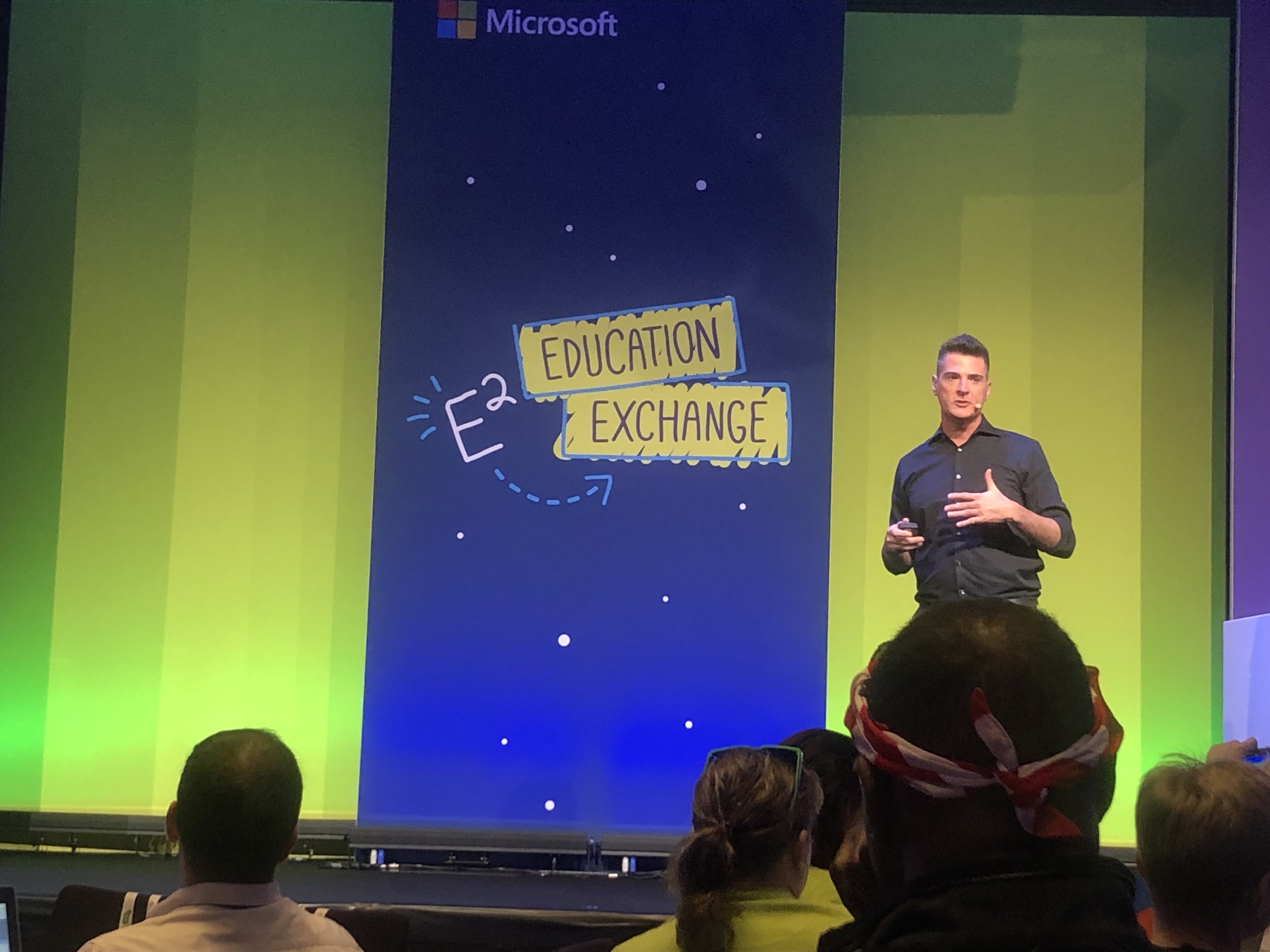 The Global Educator Challenge was a two-day activity that had one goal—to design a lesson that would immerse learners in the world of Paris. As a team, we were tasked with developing a lesson around the theme of celebrating changemakers. But first, we had to learn how to communicate with each other. This was a simple fix: Microsoft Translator. This app allowed us to communicate with each other as well as with the native language of the country we were in. While working to build a lesson, we discussed an innovative way to showcase student voice, inclusion, collaboration, and creativity. As a team, we developed an idea based around students developing tours of Paris. Students would start off with a Minecraft world of Paris that contained a game-based learning concept. They would then find NPCs that would contain Sway with an embedded Microsoft Form. When they completed the form, they would then be given the coordinates of their next NPC. While students were completing the tasks in Minecraft, they would also be tasked with developing a OneNote page containing information about the locations.

The keynote speakers on day two were inspirational and engaging. Jean-Phillipe Courtois welcomed us to his home country of France; Paula Forteza showed us the power of education in France; Anthony Salcito talked more about the future of education; Joey Taralson discussed the power of a connected world; and 15-year-old Brianna Goupaul explained the power of problem solving in education. Team USA member Karey Killian shared her story of empowering students to think and dream and MIE Experts Vineeta Garg, Michael Fleischhacker, and Steve Crapnell ended the day with talks on how they empower students in their classrooms. 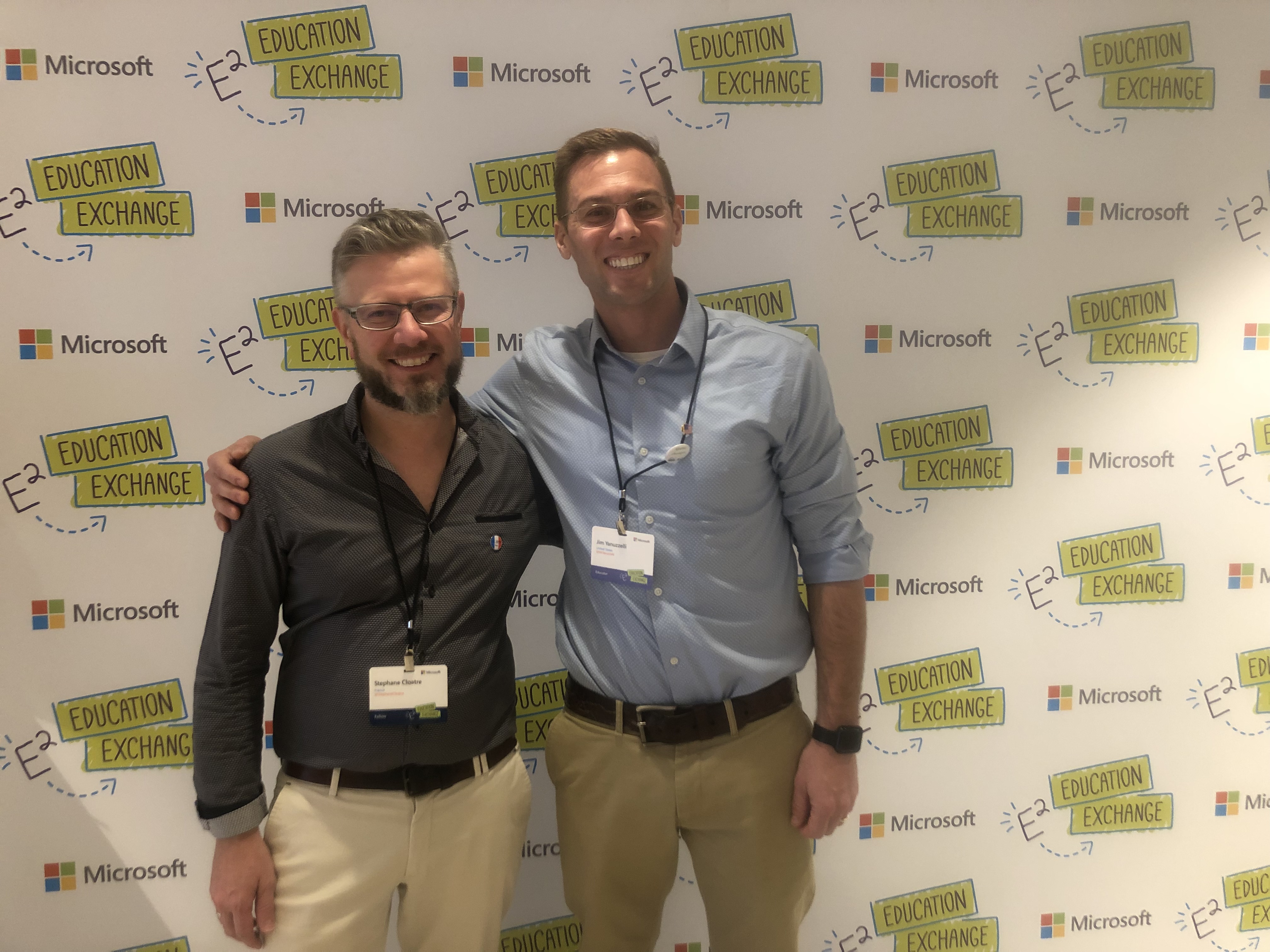 The final day and keynote session began with a welcome from Anthony Salcito. The first keynote speaker was Stephane Cloatre, who shared his story of how he used Minecraft to encourage his students ask questions and learn about the world around them. Meredith Roe of CEWA shared her journey of developing a digital learning space using only Teams to deliver education across Western Australia. Francois Taddei explained the importance of creating a global learning community and celebrating education. Lastly, Carrie Paterson shared her vision of how service learning can change the world and how WE Schools can help.

On day two and three, we had the opportunity to showcase an activity that we were proud of at the Learning Marketplace. We had all used technology in innovative ways and now we had the opportunity to display our work to inspire others. Teachers, myself included, were able to share and connect with one another. I shared my story of the importance of Learning Tools. In my classroom, we use many primary sources. These documents have no Lexile levels or tools to assist students. I was able to convert these print documents to digital using Office Lens, add them to OneNote, allowing my students to leverage Learning Tools to make them accessible.

The breakout sessions were also on days two and three. We had the choice of Minecraft, Flipgrid, Twitter, Paint 3D, Make Code, Skype, focus groups, WE Schools, and/or time for certification exams. These breakout sessions were packed with learners eager to innovate their classrooms. I had the opportunity to share my knowledge of Paint 3D on the first day breakout session. MIE Experts shared their love of Paint 3D and mixed reality with the group, and how their best practices have the power to transform learning. The joy of learning was contagious, as everyone in the room was creating and learning from each other. At the reception time together at the end of the day, we were all eager to share what we had learned with each other. Even though I was not able to attend every breakout, I was able to live through the excitement and passion of the other educators who shared their experiences with me and instilled in me a desire to learn more as soon as I could.

The culminating event of E2 was the gala and awards, which was held at the Theatre du Merveilleux. I used this opportunity to enjoy the company of all the new friends and connections I had made and we celebrated teams who built amazing lessons and those team won had won the Global Educator Challenge.”